To share your memory on the wall of William Boyett, sign in using one of the following options:

Print
William Dearl Boyett, 77, of White Hall, Arkansas, passed away at his home on Wednesday, January 15, 2020.

Mr. Boyett was born in Wasco, California, December 23, 1942, to the late Vermon William and Cora Lee Glover Boyett. He attended Wasco High School where he earned a varsity letter in football, basketball & track.

Mr. Boyett was a war time military service veteran who proudly served his country as a Sgt. in the United States Marine Corps from 1964-1968. He was a Radio Telegraph Operator and Instructor during the Vietnam War.

After his military service, Mr. Boyett relocated to Arkansas, where he lived the majority of his remaining life. He retired as Manager from Allied Tube & Conduit in Pine Bluff, Arkansas. In retirement, he enjoyed his continued love for country music, Razorbacks football, and solitude.

The relatives wish to extend a special appreciation to Mr. Boyett's step nephew, Clayton Kamber, for his devoted assistance and care he has given during this time.

Burial will be private.

Receive notifications about information and event scheduling for William

There are no events scheduled. You can still show your support by sending flowers directly to the family, or planting a memorial tree in memory of William Dearl Boyett.
Plant a Tree

We encourage you to share your most beloved memories of William here, so that the family and other loved ones can always see it. You can upload cherished photographs, or share your favorite stories, and can even comment on those shared by others.

Posted Jan 22, 2020 at 09:41pm
Like my bother Vern I to have fond memories of DEARL . The first time we met was on a construction site where we were stocking drywall for our uncle Jack . At the time we didn’t know we were cousins and we got paired up . DEARL took the lead and we were packing 4x12 bundles of drywall weighing about 200lbs and we ran with these bundles, not walked, ran all day until we were done. I thought who is this guy nobody runs with drywall . Finally at the end of the day our cousin Arnold let us know we were cousins. I was 16 at the time and a short time later DEARL moved in with us where he took me under his wing and became like a big brother. We lifted weights together , deer hunted together and he had his girl friend fix me up with a date so we could date together. Those were some of the best times of my life.
Freeman
Comment Share
Share via:
R

Posted Jan 21, 2020 at 01:57pm
I am flooded with memories. Bodok was one of my Daddy's dearest friends. I know they are having a big old reunion in heaven. Many prayers for his family and friends.
Comment Share
Share via:
VB

Many good memories of My Cousin DEARL when I was a kid in San Francisco in the 60,’s & again around 2010 when DEARL lived out at the ranch in Clements , California. DEARL was fun to be around and to work with , which we did a lot. 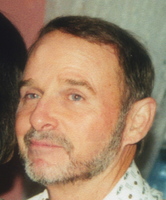