To share your memory on the wall of Thomas Malone, sign in using one of the following options:

There are no events scheduled. You can still show your support by sending flowers directly to the family, or planting a memorial tree in memory of Thomas Eugene Malone Jr..
Plant a Tree

We encourage you to share your most beloved memories of Thomas here, so that the family and other loved ones can always see it. You can upload cherished photographs, or share your favorite stories, and can even comment on those shared by others.

Posted Nov 28, 2018 at 12:00am
Sara - I am so sorry to hear of Tommy's passing. I pray strength and peace to you and your family. Please let me know if there is anything I can do to help.
Comment Share
Share via:
CA

Posted Nov 27, 2018 at 12:00am
My deepest sympathy to Sara, Sean, and Erik. Tommy and I had been friends since the Fall of 1977, and I am sincerely sorry we had lost touch. We may meet again one day on that ever shining shore. May God help you assuage your pain and heartfelt grief.
Comment Share
Share via:
M

Posted Nov 26, 2018 at 12:00am
November 26, 2018 Sara, I really appreciate your warm personality and the friendship we shared. I never will forget the wholesome family times and the truths that brought us together. The promises from God's word Tom knew --- about a future and a hope, so do we. May this bring comfort along with your host of family, friends and associates. With love Mamie
Comment Share
Share via:
GB

Posted Nov 26, 2018 at 12:00am
Sara, Eric and Sean, We always remember when we first met Tom and then all of you. It was positive from the very beginning. You all stuck together through thick and thin which is rare to see in families these days. You have a for sure valid hope of being reunited right here on a Paradise Earth. (Job 14:14,15; Psalms 115:18) Although, that’s futiure, there’s much comfort and support coming your way till then. Don’t give up! We hope to stay in touch. Much love from us both.
Comment Share
Share via:
MA

Posted Nov 24, 2018 at 12:00am
My deepest sympathy Sara to you and your sons as well as the rest of the family. May God provide you with strength and comfort at this most difficult time. I will keep this family in my thoughts and prayers.
Comment Share
Share via: 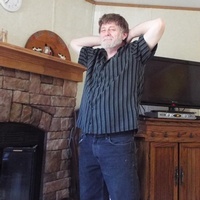