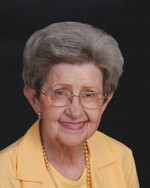 Norma Jean Smith, 87 of White Hall went home to be with her Heavenly Father on April 11,2020. She was born on July 7, 1932 and graduated from White Hall High School. Jean was retired from Woolworths and USA Drug and was a member of First Baptist Church White Hall. She will be remembered for her sunny nature and positive view of the world. She always thought the best of others and uplifted those around her. She was preceded in death by her husband, I.D. (Dude) Smith; parents, Marvin and Thalia McCrary; sisters, Helen Moustakes, Freda Manning and Laverne Carter and brother, Marvin (Buddy) McCrary, Jr.
Survivors include sister, Edith Wilson of Little Rock; step-son, I.C. Smith, his wife, Carla and their daughters and their children: Leah Smith; Lara (Eric) Hammje, Ivan and Merrick; Amy (Jonathan) Bennett, Chase and Griffin. She is also survived by a host of loving nieces and nephews.
Memorials can be made to First Baptist Church White Hall. No services are planned at this time. A public celebration will be scheduled later.
www.rfwhitehall.com