To share your memory on the wall of Marynell Cardin, sign in using one of the following options:

Marynell graduated from White Hall High School in 1... Read More
Marynell Freeman Cardin, 79, of White Hall passed away on August 6, 2020 at home. She was born on June 15, 1941 in Dumas, Arkansas, to the late Gilma W. Freeman and Lillian W. Freeman.

Marynell graduated from White Hall High School in 1959, then attended University of Arkansas at Fayetteville, where she met and married David Cardin.

From this union, they had two daughters, Tracy Cardin (Clark Joiner) and Amy Cardin (Eric Stenstrom), who reside in Oak Park, Illinois.

David and Marynell moved often and made many friends. Marynell was an active volunteer in her children’s schools, including starting one of the first integrated Girl Scout troops in Georgia. When she and David divorced, she began a career at GTE in Bloomington-Normal, Illinois.

In 2000, Marynell and Tom moved to White Hall to care for her aging parents. At this time, she began working with the State of Arkansas, where she worked for 10 years. Then she had the opportunity to share ownership of Curves in White Hall.

Marynell was a member of White Hall United Methodist Church, and a member of the Women’s Circle Group. One of the highlights of her life was when she led the children’s program during worship services. She always had a special treat for each of the children, and it brought her much joy.

She was an active member of the Jefferson County Extension Homemakers. One of her favorite activities was baking and preparing delicious dishes-to the delight of her friends and family.

Marynell is survived by her husband, Tom York, her children and eight grandchildren that she adored.
There will be a drive through visitation Friday, August 7, 2020, from 5:30-6:30 p.m. at the family home, 501 Park Terrace in White Hall. Services for Marynell will be private.

The family has requested that in lieu of flowers, memorials be made to St. Jude Children’s Research Hospital, stjude.org.

Arrangements were by Robinson and Fuller White Hall Funeral Chapel. Online condolences and video messages may be left on the website, www.RFWhiteHall.com.
Read Less

To send flowers to the family or plant a tree in memory of Marynell Freeman Cardin, please visit our Heartfelt Sympathies Store.

Receive notifications about information and event scheduling for Marynell

We encourage you to share your most beloved memories of Marynell here, so that the family and other loved ones can always see it. You can upload cherished photographs, or share your favorite stories, and can even comment on those shared by others.

Posted Aug 10, 2020 at 02:02pm
Rest In Peace Marynell. I only knew you for a brief time but I enjoyed every minute of it. You are in a good place now with our Lord Jesus Christ.
Comment Share
Share via:
MB

Posted Aug 09, 2020 at 11:54am
Marynell was a very avid dominoes player too! I will always cherish my time with her playing Mexican dominoes❤️
Comment Share
Share via:

Posted Aug 08, 2020 at 01:21pm
Marynell was my grandmother, and has always been a part of my life. I don't remember my childhood very well, but several of my most vivid memories come from spending time with her in Arkansas. I can remember visiting the park behind her house. I can remember watching movies in her living room. I can remember going to the "Purple Cow" restaurant with her and getting milkshakes. Marynell was always a positive influence in my life. It was always a joy to have her visit for holidays or special events. She always had some sort of recipe or treat for us. She will be dearly missed.
Comment Share
Share via:
TH

Posted Aug 07, 2020 at 11:45pm
I am saddened to hear of the passing of Mrs. Marynell she was a joy to be around. I loved her cooking and fellowship!! I know she will be missed by many and I am so sorry for your loss.
Comment Share
Share via:
NR

Posted Aug 07, 2020 at 09:07pm
I was so sad to hear about the passing of Marynell. She was both intelligent and fun. We were both Extension Homemakers. I enjoyed working in Baked Goods at our Southeast Arkansas District Fair as well as judging at other fairs. I will miss her very much.
Comment Share
Share via: 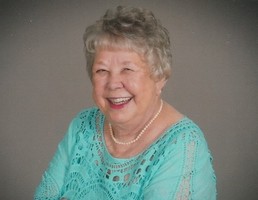