To share your memory on the wall of Margaret Davis, sign in using one of the following options:

Print
Margaret Neill Davis passed away peacefully at her home in Little Rock on November 14, 2019 at the age of 94.

Margaret was born on August 27, 1925 in Greenville, MS. She was preceded in death by her husband of 33 years, Howell N. Davis ... Read More
Margaret Neill Davis passed away peacefully at her home in Little Rock on November 14, 2019 at the age of 94.

Margaret graduated with honors from Northwestern State College in Natchitoches, Louisiana with a BS in Business Administration, and was a member of Delta Sigma Epsilon sorority. After graduation, she moved to Memphis, TN and worked for Union Planters Bank, Eastern Airlines, and then First National Bank where she met her husband Howell, who was a bank examiner with the Federal Reserve Bank of St. Louis. Margaret and Howell were married in Memphis in 1953, and after a honeymoon in Florida they moved to Pine Bluff when Howell accepted a position with Simmons Bank.

For the next 33 years, Margaret devoted her life to raising her four children and supporting Howell until his sudden death in 1986. She was a true Southern Lady and a loving mother and grandmother to all her family. Margaret lived a full, courageous, and dignified life, and will be dearly missed by her family and many admirers.

The family would like to express our gratitude for the care given to our mother over the last several months by Margaret Williams, Edith Chandler, and Veola Jefferson with SeniorKare of Little Rock.

A private graveside service will be held in Pine Bluff.

Memorials are requested to be made to St. Jude Children's Research Hospital, 262 Danny Thomas Place, Memphis, TN 38105, or a charity of your choice.

Receive notifications about information and event scheduling for Margaret

There are no events scheduled. You can still show your support by sending flowers directly to the family, or planting a memorial tree in memory of Margaret Davis (Neill).
Plant a Tree

We encourage you to share your most beloved memories of Margaret here, so that the family and other loved ones can always see it. You can upload cherished photographs, or share your favorite stories, and can even comment on those shared by others.

Please accept my deepest sympathy regarding the loss of your Mother. My parents, Helen and Rudy Martin, Sr. were very close friends with your parents. Dad worked at the bank too, and he and your Dad shared many laughs there. I remember that at Christmas time my folks would visit several families that had youngsters, and yours was one of them.

I got to know Stephen when we were both in the Mortgage Loan business, and I’ve enjoyed serving with Lisa as a Chalice Bearer at St. Andrew’s Anglican Church. If you haven’t heard the “hot chocolate” story get her to tell it to you!

Your folks were special people to me. 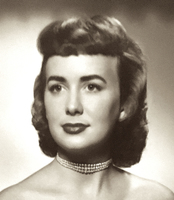