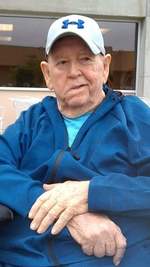 Leigh D. Poynter, Jr., 85, of Center, Missouri, formerly of White Hall, Arkansas, went to be with the Lord on October 1, 2019.
He was born April 4, 1934, in Tyler, Texas to Leigh D. Poynter, Sr. and Eva Nelson Poynter.
He served in the United States Air Force and was a computer engineer for IBM.
Don was always active in all of his children's activities and sports. He was very much a part of their lives and they knew they were loved. Don had many friends. He helped anyone he could. He will be sorely missed!
He is preceded in death by his wife, Sylvia Poynter; his parents; sisters, Ida Jeanette Poynter and Rose Marie Spencer.
Survivors include his three children, Steven L. Poynter of Whitehall, Scott L. Poynter, wife Kim of Russellville, daughter, Tracy A. Daniel, husband Mike of Center Missouri; six grandchildren; ten great-grandchildren; two sisters, Nita May Cater of Florida and Betty Crawford of Louisiana.
A Memorial Graveside service by Ralph Robinson & Son will be Friday, October 11, 2019, at 1 PM, in Memorial Park Cemetery.