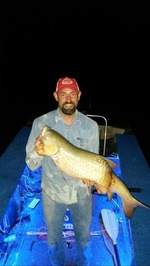 Dennis Keith Kennedy, II, 42, of Redfield, Arkansas, passed from this world into the arms of Jesus on Friday, August 9, 2019.
He will forever be remembered as a man with a big heart who fiercely loved his family and never passed up an opportunity to help others. He was truly a selfless person.
He was born July 1, 1977, in Boulder, Colorado, to Dennis Keith and Jeannie Aaron Kennedy.
When he was 4 years old, he moved to Redfield, a community he was thankful to be able to call home.
He received his education from Redfield and White Hall Schools, graduating from White Hall High School in 1995.
He relished the opportunity to face new challenges. Keith was a retired bull fighter and bronco rider and was an avid outdoorsman and championship bow fisherman. He had served on the Bow Fishers of Arkansas and the Bow Fishers of America.
He had a BIG heart and always helped others in need. He was known for his “Air-Boat” during disasters in Arkansas and along the gulf coast to help in any way. He received many thank you notes for his willingness to dedicate his time and effort to rescue others. He will be greatly missed by all.
Keith worked as a driver for US Foods.
Keith was preceded in death by his grandparents, Bert and Evelyn Aaron and Merle and Betty Kennedy.
Keith was blessed with a beautiful loving wife, Amy Crowson-Ashcraft Kennedy, whom he married on December 3, 2011, two daughters whom he adored, Laney Kennedy and Clara Kennedy; his parents, Dennis Kennedy of Fort Smith and Jeannie Kennedy of Redfield; numerous aunts, uncles, nieces, nephews, cousins and extended family and friends.
Visitation will be Friday, 6 to 8 PM, at Family Church – Redfield Campus.
Funeral service conducted by Robinson & Fuller Funeral Home will be Saturday, August 17, 2019, at 10 AM, Family Church – Redfield Campus with Reverend Dan McDonald officiating.
Burial will follow at Redfield Cemetery.
In lieu of flowers the family request that memorials may be made to Relyance Bank c/o Kennedy Family.
Online register at RFWhiteHall.com