To share your memory on the wall of Gordon Murray, sign in using one of the following options:

To send flowers to the family or plant a tree in memory of Gordon "Grizz" Murray, please visit our Heartfelt Sympathies Store.

Receive notifications about information and event scheduling for Gordon

We encourage you to share your most beloved memories of Gordon here, so that the family and other loved ones can always see it. You can upload cherished photographs, or share your favorite stories, and can even comment on those shared by others.

Guaranteed hand delivery by a local florist
AS

Posted Feb 18, 2021 at 09:19pm
Our thoughts and prayers are with Iris and family members of Gordon. Through our many years of friendship and association with Gordon, I can't think of anyone who showed more dedication to veterans and young people than he did. He was always there to lend a helping hand and certainly leaves a void in the lives of many.
Anna & Everett Smith

Posted Feb 14, 2021 at 04:44pm
Please accept my deepest sympathy for Gordon. Brad and I became friends at Redfield American Legion. Never a dull minute when around Gordon always a smile . We will remember Gordon for his Kindness and helping someone especially The Veteran. God Bless and Prayers for Iris and Family🙏❤️ When I called Iris Gordon referred to me old lady in nursing home always a good laugh lol Linda Locke. 🙏❤️
Comment Share
Share via:
RV

Posted Feb 11, 2021 at 05:17pm
What can I Say, "Griz" and Ms. Iris were some of the First People I met when I became a 40et8'er. He was one of the Most Dedicated and Hardest Working Man I knew in the Organization. He had a Magnetic Personality in spite of being a Salty Old Sailor!!! Ms. Iris My Deepest Heartfelt Condolences to You and Your Family. Griz will be Sorely Missed and ALWAYS Remembered with RESPECT!!!🇺🇲
Comment Share
Share via:
E

Posted Feb 11, 2021 at 09:15am
I am so sorry to hear about Gordon. My deepest condolences and prayers to Iris and all his family. I have missed answering the phone at The American Legion HQ and hearing him say “What took you so long to answer”.
Comment Share
Share via:
M

Posted Feb 10, 2021 at 10:37pm
I’m so sorry for the loss of Mr Grizz . Many memories of him as a youngster growing up in White Hall . He was a gentle giant & always so kind . My family sends their deepest condolences .
Comment Share
Share via: 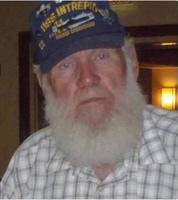