To share your memory on the wall of Gene Stewart, sign in using one of the following options:

Print
Gene Merle Stewart, age 71, of White Hall, went to be with his Lord and Savior on Monday, July 13, 2020. He was born September 15, 1948 at Arkansas City to the late John Lee Stewart and Ruby Lee Fletcher Stewart.

Gene was a faithful memb... Read More
Gene Merle Stewart, age 71, of White Hall, went to be with his Lord and Savior on Monday, July 13, 2020. He was born September 15, 1948 at Arkansas City to the late John Lee Stewart and Ruby Lee Fletcher Stewart.

Gene was a faithful member of Hardin Baptist Church, and considered it a great honor and privilege when he was ordained as a deacon in 2018. He enjoyed working with young people and took on the responsibility of caretaker of the Hardin Baptist Ball Park, which was renamed Gene Stewart Field in his honor.

After graduating from White Hall High School in 1967, he furthered his education at Henderson State Teachers College. He earned his Master’s degree from Auburn University.

Gene began his career in the Dollarway schools for several years and for 24 years in the Watson Chapel School District. He retired as the principal of Watson Chapel High School after 31 years in education.

He enjoyed playing golf, yard work, taking care of the ballfield, being with his grandbabies, and serving the Lord.

In addition to his parents, he was predeceased by a son, Kye Garett Stewart; his stepfather, James McGarity; and five brothers, John Allen Stewart, Gordon Stewart, Donny Stewart, Billy Stewart, and Stevie Stewart.

Visitation will be Wednesday from 5:00-7:00 p.m. at Robinson & Fuller White Hall Chapel.

The family also wishes to thank Arkansas Hospice and Robinson & Fuller for their service.
Read Less

To send flowers to the family or plant a tree in memory of Gene Stewart, please visit our Heartfelt Sympathies Store.

Receive notifications about information and event scheduling for Gene

We encourage you to share your most beloved memories of Gene here, so that the family and other loved ones can always see it. You can upload cherished photographs, or share your favorite stories, and can even comment on those shared by others.

Watson Chapel Class of 1996 and From your CalArk Family sent flowers to the family of Gene Stewart.
Show you care by sending flowers

Posted Jul 21, 2020 at 05:28pm
I'm so sad to learn of Gene's passing. We have known each other all our lives. His large family and my large family lived next door to each other near Dollarway School growing up. Our families were an extension of each other. We never knew which house we would wake up at. We remained friends through the years, though we didn't get to see each other much, as I live in another state. I will say this: I was always extremely proud of him. In spite of his humble beginnings, he accomplished amazing things. What a role model he must have been to his family and students. I loved him just like a brother and will miss him terribly. Condolences go out to his beautiful wife, Pat, and the rest of his loving family. SEE YOU ON THE BACK NINE, MY FRIEND!
Comment Share
Share via:
SP

Posted Jul 16, 2020 at 11:54am
The Service was a very wonderful tribute to Gene. He will be greatly missed. Our prayers are always with you and the family. The Hargrave Family
Comment Share
Share via:
JL

Posted Jul 16, 2020 at 11:18am
Deepest sympathy and many prayers. Gene has been a caring, thoughtful and loving neighbor. Gene and his great smile will be missed very much.
Comment Share
Share via:
DR

Posted Jul 16, 2020 at 10:01am
Our thoughts and prayers are with all of his family and friends during this time. He was a special person and we have many wonderful school event memories during our Watson Chapel years. 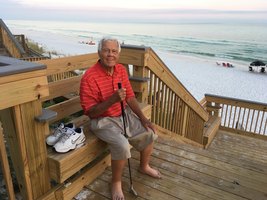