To share your memory on the wall of Edward Thompson, sign in using one of the following options:

Receive notifications about information and event scheduling for Edward

There are no events scheduled. You can still show your support by sending flowers directly to the family, or planting a memorial tree in memory of Edward Eugene "Gene" Thompson.
Plant a Tree

We encourage you to share your most beloved memories of Edward here, so that the family and other loved ones can always see it. You can upload cherished photographs, or share your favorite stories, and can even comment on those shared by others.

Posted Aug 15, 2020 at 12:07am
Shari, Ronnie and Daniel thinking of you in the loss of you Dad and Pa . You could always tell he was so proud of the three of you and loved each of you so much. Cling to your precious memories and may they bring comfort and peace to your weary hearts today and the days ahead. Thinking of y’all with love and prayers. God Bless you.
Comment Share
Share via:
KR

Posted Aug 14, 2020 at 11:40pm
My Mom and Dad moved next door to Mr. Gene and his wife in 1984. They quickly became great friends. They even built a bridge across the creek so they could just go back door to back door. Gene loved his garden and was always trying new varieties of tomatoes and other vegetables. Sometimes he would come over 3 or 4 times a day with a bucket with some "goody'" for us to try. He kept us supplied with vegetables summer and winter (we put what we didn't eat in the freezer). He had a dry sense of humor and he was always trying to "get" me -- and he usually did! He and my Dad were very close and always "picking" at each other and laughing. After my Dad passed away 6 years ago, Gene checked on my Mom daily to make sure she was okay or needed anything (even though I live by her). He was "one of a kind" and Mom and I already miss him so very much.
Karen Branch Robinson
Comment Share
Share via: 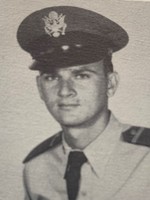