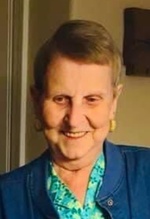 Brenda Sue Griffin, 70, of White Hall, died Friday, February 19, 2021, in a local hospital. She was born November 3, 1950, in Pine Bluff to Willie H. and Ela Mae Lawrence Gates. She was a nurses’ aide and was a Baptist. She was preceded in death by her grandson, Tyler Griffin.

She loved her family and enjoyed spending time with her grandchildren.

At her request, there will be no services scheduled.

Cremation arrangements are under the care of Robinson and Fuller White Hall Funeral Chapel.