To share your memory on the wall of Bobby Ashcraft, sign in using one of the following options:

Born September 11, 1935 in White Oak Township in Cleveland County, he was a son of the late Irvin Rowland Ashcraft and Estelle Alice Walke... Read More
Bobby J. Ashcraft, age 84, of White Hall, passed away from this life on Sunday, December 22, 2019.

Born September 11, 1935 in White Oak Township in Cleveland County, he was a son of the late Irvin Rowland Ashcraft and Estelle Alice Walker Ashcraft.

He attended Pine Bluff Schools until entering the United States Navy for a nine-year tour during the Korean War. He later served in the Arkansas National Guard for seven years.

After leaving the Navy, he joined the Pine Bluff Police Department in 1962. In 1964, he went to work for International Paper Company. In 1971, his position at IP was sold to a firm in Australia, where he was sent for three months to train his replacement.

Mr. Ashcraft was an avid Razorback fan and was a “Jack of all trades” who could repair anything, a woodworker, and could build anything.

Online condolences may be made at RFWhiteHall.com

2 Timothy 4:7=8 states “I have fought the good fight, I have finished the race, I have kept the faith. Now there is in store for me the crown of righteousness, which the Lord, the Righteous Judge, will award me on that day, and not only to me, but also those who have longed for his appearing.”
Read Less

To send flowers to the family or plant a tree in memory of Bobby Ashcraft, please visit our Heartfelt Sympathies Store.

Receive notifications about information and event scheduling for Bobby

We encourage you to share your most beloved memories of Bobby here, so that the family and other loved ones can always see it. You can upload cherished photographs, or share your favorite stories, and can even comment on those shared by others.

Thank you Tammy for your kind words.

Posted Jan 05, 2020 at 08:14am
My sincere condolences to your family. I worked at NCTR and knew Bobby to be a very kind man who always took the time to stop to say hello and inquire on how you were doing. I would see him and Mrs. Ashcroft sometimes shopping in Walmart and they were always looking out for each other. I know that he will be dearly missed by his family and his friend but take comfort in knowing that Bobby is resting with the Lord.
Comment Share
Share via:
EA

Thank you Jeannette. My dad will be sorely missed.
BS

Posted Dec 26, 2019 at 12:08pm
Mr. Bobby was a very sweet and carrying man
With many talents
And now that his work here on earth is done
Mr. Bobby can rest with no more pain and suffering-AMEN
Comment Share
Share via:
EA

Posted Dec 25, 2019 at 09:12am
I'll always remember Bobby as a kind, loving, and true friend to me and to my brother, Jerry. I know he is at peace and resting in the loving arms of Jesus.
Comment Share
Share via:
EA

Thank you Sally for your kind words.
CF

Posted Dec 24, 2019 at 08:15am
Please accept our most heartfelt sympathies for your loss... Our thoughts are with you and your family during this difficult time. 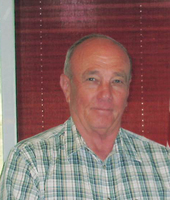